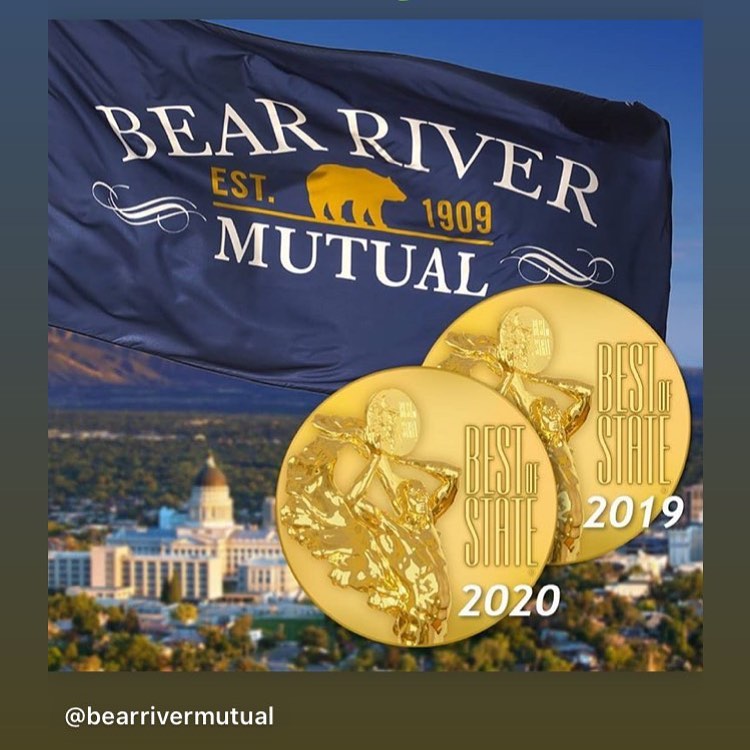 We are so proud to be an agent for Bear River Mutual Insurance. They are one of the greatest, most reputable companies in the industry and they are based right here in Murray, Utah. Since 1909, they have been a great example Utah families how insurance companies should treat their customers. Bear River’s claims service is fantastic. Our agency is always receiving great reviews about how well they were treated during the claim process with Bear River. Below you will find detailed information about Bear River Mutual.

How do they keep their prices so low?

We get asked this question all the time. According to Bear River President Don Adams, the company caters only to the Utah community and is therefore able to provide more personalized service. Innovative approaches to insurance, like Bear River’s policy of only offering auto insurance to people who do not consume alcohol or illegal drugs, help keep premium prices low. What Don Adams said is true. Bear River caters to a specific market and therefore, the rates for that market can be kept very low. Call us today to get a Bear River Insurance quote and see how much you can save today!

At Bear River Mutual Insurance Company, values have always guided the way we do business and conduct our lives. Since our founding in 1909, times may have changed, but our dedication to service, integrity and honesty has always served as the cornerstone of our company. Our slogan, “Where Values Count,” is much more than just words. It’s a reflection of our past, present and future. It’s what distinguishes Bear River from other insurance companies. Since Bear River only offers insurance in Utah, our policyholders work with local people on a one-to-one basis. This ensures the highest quality personalized service available. At Bear River, claims are always processed in an easy and efficient manner. Bear River offers personal auto, homeowners, fire and umbrella insurance coverage.

Bear River Mutual Insurance Company was organized July 1, 1909 in the small town of Garland in Northern Utah. The company was initially formed because many farmers felt they couldn’t afford insurance offered by Utah’s other companies. In its early days, Bear River was known as Farmers’ Mutual Insurance Company. Its chief founder was Willard Snow Hansen, the son of a Danish immigrant. Hansen was a farmer, state legislator, sheep grower, champion horse breeder, and organizer of telephone, power and light, water and irrigation systems. Hansen, along with the company’s 14 other founders, was instrumental in introducing the concept of insurance to area farmers and business owners. Many Utahns at the time didn’t think insurance was a necessity. Instead, they believed that in times of disaster, volunteers would come to the rescue and help rebuild a business or a barn. With the birth of Bear River, people living in Northern Utah began to realize there was a real need for insurance. Plus, if they pooled their resources among a select group of insureds with similar values and characteristics they would lessen the financial uncertainties that can come from a property or casualty loss. Initially, the company only insured against loss by fire or lightning. In its first year, the original founders paid premiums of $1,967.69 to insure property with values totaling $47,950. Bear River added auto insurance in the 1930s and provided a package homeowner policy in the late 1950s. Today the company writes personal auto, homeowners, fire and umbrella coverage. Bear River is the state’s largest Utah-based auto and home insurance company with over $92 million in premiums for 2011.

Bear River Mutual Insurance Company was named as one of the nation's top 50 performing insurance companies by the Ward Group for the last three consecutive years. The Ward Group is an operational consulting firm and provider of benchmarking and best-practices services to the insurance industry. Bear River was the only Utah-based insurance company included on the list. Bear River's financial performance was evaluated over the past five years and compared with that of more than 3,100 property-casualty insurance companies.

What is a Mutual Company?

Bear River Mutual Insurance Company is part of a 250-plus-year-old tradition that began in 1753 with Benjamin Franklin, the inventor of the lightning rod and founder of the first successful mutual insurance company in America. At Bear River, the customers are the owners of the company. Premiums are paid into a common fund to cover policyholders' claims. Positive earnings are passed on to the policyholder through lower than average insurance rates. From its inception, Bear River's allegiance has been to its policyholders. The purpose of the company has always been to make insurance affordable and accessible. Bear River has grown into a very competitive and respected company. Bear River wrote over $92 million in premiums in 2011, and is represented by independent agencies throughout Utah. Consumer and industry reports continue to recognize Bear River's financial strength, stability and bright future.

Bear River Mutual Insurance Company and its employees are committed to giving back to the community. Throughout the years, Bear River has donated time and money to worthy causes around the state. In 2009, in conjunction with the company's 100-year anniversary, Bear River employees embarked on two major community projects.

In May employees cleaned and improved the Boys & Girls Club of South Valley's Murray Club. The employees targeted the volleyball court, putting green, garden beds and courtyard areas of the club. For a few weeks prior to the project, Bear River staff members either purchased or solicited donations for volleyball and basketball nets, putting green accessories and plants for the project.

Helping a Family in Need

Throughout the spring and early summer of 2009, Bear River worked with Catholic Community Services of Utah to find a family in desperate need of a vehicle. Bear River and one of its preferred vendors, Central Collision Center, located a damaged Chevrolet Impala. After several weeks, the car was completely repaired to near-new condition. According to Bear River President Don Adams, "We wanted to do something special for our 100-year anniversary—something that would have a huge impact on helping the lives of a family. All of us at Bear River and Central Collision were really excited to be a part of this project." On Aug. 21, the James Mangum family was invited to attend a party in honor of Bear River's anniversary. The family had not been told they were to be given the car at that time. The Mangum family includes father, James, mother, Nelda, and children, Britney, 8, James, Jr. 6, Hailey, 4 and Camile, 2. In addition, grandmother Winnifred May, 77, was often called upon to provide transportation since the Mangums' existing car was usually either not running, or on the brink of being broken down. The family's schedule is incredibly demanding. James usually wakes up at 4:30 a.m. in order to catch a ride to work as a union painter. Camile, suffering from the side effects of a premature birth including sickle cell anemia, is driven to doctors' appointments on average of twice a week. When Winnifred's vehicle was not available, Camile and her family often walked to the doctors' offices, several blocks from the family's home. Adams said, "We understand that the entire family relies on a relative's vehicle in order to travel to work and consistent doctors' appointments, as well of the rest of life's demands. Very little has been easy in the lives of this good Utah family and it was an honor to help them as part of Bear River's 100-year anniversary celebration." Other sponsors involved with the car included Akzo Nobel, Hillside Tire and Service, Price Towing, LKQ, Larry H. Miller Chevrolet, AirbagService.com and McKee's Auto Glass.

"I thought I had the best rate through Farm Bureau, but calling Bear River saved me over $800 per year! Additionally, Rob Jackson really goes out of their way to make sure my family's needs are met. I wouldn't insure anywhere else."

I love Rob Jackson and his team. Wendy always responds quickly and provides me with the information I request. She is fantastic and gets the job done. I went with Rob Jackson Insurance because they had the best rates, I’ve been with them for about 17 years and hope to do business for another 17.

We first changed to Bear River a few years ago when our first child got a driver's license. By far the best rates around for male teen drivers. We also have our homeowners policy and a few rental properties policies with Bear River and its a fantastic working partnership! Wendy is one of the greatest agents I've ever worked with. She's great at answering any questions I have and getting back to me in a timely manner. I honestly feel like Wendy is my friend not just my insurance agent.

Bear River Insurance saved us from paying $200+ more a month to State Farm. Wendy was a miracle worker and couldn’t have come at a better time. Very professional and did everything possible to get us out of a very bad situation. We will appreciate them forever. I highly recommend Bear River insurance if you want good and honest people to handle your coverage.

They answered their phones every time I called. Answered all my questions. Gave me a great rate. What’s crazy is we asked my old insurance agent to quote us with bear river and they said they did and our current insurer was the best price. Rob Jackson’s insurance quote was so much lower. They have a lifetime customer in me. Aaron and Jacob were awesome!
We work closely with you and carry out research to understand your needs and wishes.
VIEW MORE